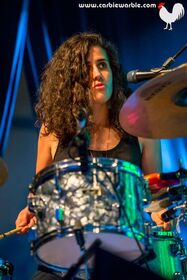 Foremost a captivating storyteller, Cat Canteri is also a dynamic singer-songwriter and multi-instrumentalist.

Based in Melbourne, Cat is known in the Australian folk and Americana scene for poetic and provoking lyrics, effortless velvet vocals, and her engaging performances.

Canteri is also a respected drummer who formed The Stillsons alongside Justin Bernasconi in 2006. The band released three critically acclaimed albums: Circus (2009), Earnest (2011) and Never Go Your Way (2013). She has also played drums for the likes of Kutcha Edwards, Mick Thomas (Weddings, Parties, Anything) and Brendan Gallagher (Karma County).

In 2014, Cat released her debut solo album When We Were Young, produced by ARIA award- winner Craig Pilkington. The album placed her country folk meets indie-rock style at centre stage, the songs telling stories of real life and experiences, framed and coloured by her exquisite voice and playing. The album received widespread critical acclaim and airplay across Australia and the BBC network, being featured by the legendary Whispering Bob Harris on his BBC Radio 2 show.

In 2016, Cat released the EP Late At Night capturing both the vitality and intimacy of her live shows. Venturing into new territory with a reckless electric guitar style and bold, unselfconscious vocal delivery. Her 2018 record Inner North went deeper into the narrative songwriting genre. Her three-dimensional lyrics and vivid storytelling shine on all 11 tracks with critical acclaim from international publication The Music Below USA “An impressive work of songwriting mastery", as well as closer to home with ‘Album of The Week’ in JB Hi-Fi Mag Sydney and The Age. On Inner North The Music proclaimed “Her sense of patience, self-determination and the evolution and refinement of her songwriting makes Inner North her most rewarding record to date."
Much has changed since Inner North. Motherhood has drawn her process closer to home. Songs are captured hot, in stolen moments. Cat’s latest single release, the hypnotic Lost Years, is the first in what feels like a new era of music creation. Atmospheric guitar circles off-kilter drums. A rhythmic vocal chorus nags like a softly dripping tap. The story that follows is half-told, half-murmured, like the ones that echo in your head after lights out. Unfinished business. Lost Years is a new kind of song for Cat Canteri and is a standalone precursor to the unformed album to come.